Figures reveal a clear disjunction between the world NGOs seek to create, and the world their governance structures reproduce

Diversity and inclusion are important to almost all non-governmental organisations. To what extent do NGO boards adequately reflect these values, or the experience and diversity of those they exist to serve?

To find out, I looked at the 2013 Top 100 NGOs. Released annually, this is a list of what the Global Journal considers to be the most impactful, innovative and sustainable NGOs. I chose to work with it because it provided a reasonable sample. 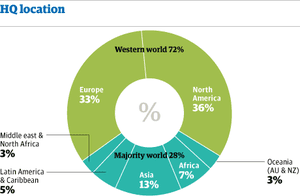 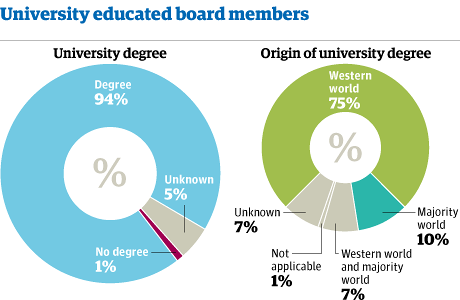 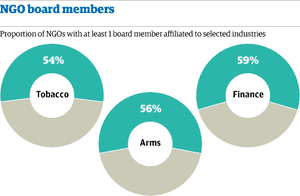 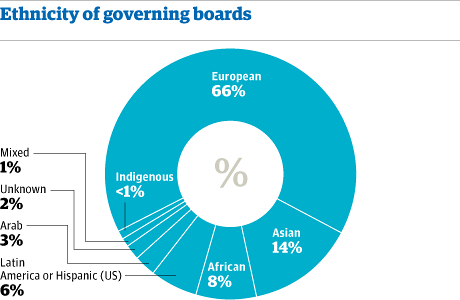 Taken as a body, most of the surveyed NGOs work for populations that are predominantly non-European and relatively poorly educated; most also promote gender equality and women's empowerment. Yet their own leaderships are primarily composed of western educated male graduates of European origin.
Selected professional affiliations 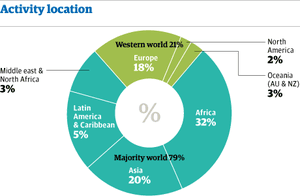 In different ways, the NGOs surveyed promote ideals of justice and social progress. Yet over half have board members who are affiliated with companies that invest in, or provide legal, marketing, or other services to the arms, tobacco and finance industries.

The figures reveal a clear disjunction between the world these NGOs seek to create, and the world their governance structures reproduce.
By appointing boards that are predominantly of European origin, they perpetuate values that assume 'whiteness' is superior to 'blackness' and attitudes tainted by a western-saviour myth. The very low number of African members is particularly troubling, because more than one third of projects take place in that region.
The representation of women may appear to be less alarming, but the ratio of women is still relatively low. Furthermore, 65% of female board members are of European origin — a figure that rises to 75% among western NGOs. This reveals the importance of intersectionality; if they wish to be inclusive and diverse, for example, NGOs need to consider gender and ethnicity.
Given the ethnic composition of the boards, it is not surprising that most members graduated from western universities. Although the value of higher education and the excellence of many western universities are undeniable, the NGOs surveyed are almost completely reliant on western knowledge paradigms, though they work in many areas of the world where other systems of thought are strongly present. Through this choice, they inevitably exclude points of view that are relevant or vital to the work they do or the people they serve.
Their professional affiliations raise similar inconsistencies.
Many would question whether association with the arms and tobacco industries is compatible with the promotion of ideals of justice and social progress. Even if no position of principle is taken, however, NGOs certainly need to explain how association with these industries is consistent with their objectives.
Association with the finance industry might seem more defensible. Boards have a duty of financial oversight, and many of the NGOs surveyed manage large budgets. They nevertheless have a duty to explain their choices, and most do not do so.
The reputation of the banking sector was highly compromised by the greedy and irresponsible conduct of numerous banks and investment houses in the period before and after the 2008 crash. It cannot credibly be said that the sector has shown evidence of working to protect the interests of less privileged groups in society, who are the primary constituents of most of the listed NGOs. They should therefore ask themselves whether the appointment of numerous senior executives and partners in large investment banks and hedge funds helps them to achieve their mission.
As individuals, of course, bankers too can be philanthropists. It is not a question of excluding such sources of economic expertise altogether. What is shocking is the number of them on NGO boards, and the glaring absence of so many other kinds of expertise.

The leaderships of these NGOs have a social profile that is at least at odds, and probably incompatible, with their ideals and mission. Some social bias was understandable in the historical context in which international NGO activism formed in the last century; that time is past.
If NGOs are to achieve meaningful, representative diversity, they need to be more transparent, more accountable, and far more ambitious. If they are to realise their ideals of justice and social reform in today's highly mobile, diverse, information rich world, they need to draw on skills and experience from across the globe. To do their jobs, their boards need to be adequately diverse, representative, and well-informed: at present, the NGOs surveyed are manifestly deficient in all three respects.
Fairouz El Tom is creative director at Plain Sense in Geneva, and conducts independent projects on issues related to diversity and "otherness". She tweets at@onrelating.